Good morning, everyone, it is thrilling to see so many gathered here on this beautiful Easter Sunday at Epworth United Methodist Church. For those of you who haven’t been journeying with this congregation in the last several months, since the first Sunday of Lent, we’ve been working our way through the wisdom of the 12 steps. The 12 steps are the program that undergirds Alcoholics Anonymous and other recovery groups, and as we’ve engaged the wisdom that so many have found transformative for their own lives, we’ve recognized that all of us experience being lost and only with God’s help can we move out of those lost places in our lives.

Today we rejoice in being FOUND, at being brought back from death into new life through the power and the message of the resurrected Christ. We’ve gone from the despair of lost to the joy of found. Thank you especially to Mikko for sharing his witness of having been lost in an addiction to cynicism and saved through the grace of God that pulls us to live in gratitude and belief.

I have a good friend who was lost in the grief of a relationship that had ended. She wasn’t eating, she had isolated herself from her friends, and she kept calling her former boyfriend, seeking to rekindle the relationship. She would make him food and take it to him. But each time she did, he only reaffirmed to her that that the relationship was over. Her pain and depression deepened. This otherwise very competent and wise woman could not find her way past this point. Finally, she was so weakened and so low and in such a dangerous state that her family was able to convince her to see a therapist.

She went to her appointment and shared her story, and the therapist said, “You are clinically depressed. You need to come to see me three times a week for the next six months.” My friend lives close to the edge financially and she doesn’t have insurance so she told the therapist this wasn’t possible for her. So the therapist looked at her, paused, then decided to break her own rule of not telling a patient directly what to do to get well. This is a rare thing for a therapist to do rather than journeying with a patient so they could discover the truth for themselves. But this was an extreme situation, and the woman said, “OK. Here is what you need to do. Start eating three healthy meals a day. Take a walk of at least 30 minutes a day. Try to sleep at least 8 hours. You’re co-dependent and you need to join a support group and you need to find a community. Do not contact your former boyfriend again.”

Today’s scripture from Luke, tells us that the women who had been among Jesus’ closest companions rose on the first day of the week at early dawn to go to the tomb where Jesus had been laid. They were in deep grief, depressed, perhaps dangerously so. They prepared spices with which to anoint his body. But when they arrived, they found the stone had been rolled away from the tomb and that it was empty. And then two men in dazzling white said these miraculous words to them, “Why are you looking for the living among the dead?”

My friend took the therapist’s advice. She started eating better and taking a walk once a day. She started getting to bed at a decent hour. She deleted her former boyfriend’s number from her phone. She realized that she had been looking for the living among the dead. She googled where she could join a support group for co-dependents and was directed to an Alanon group in Richmond. When she went to the building at the appointed hour, it was actually an AA group, but she felt so warmly welcomed she decided to join that group. And by turning her grief over to God, and finally admitting she was lost, she began to be found. She worked the steps, she found new companions, and she shares her story with just about everyone. It was one of the first things she told me about herself.

Why are you looking for the living among the dead, the angels in Luke’s story say to the women who had gone to be with Jesus’ dead body. Then they go on to say, “He is not here, but has risen. Remember how he told you, while he was still in Galilee, that the brokenness of this world would kill him but on the third day he would rise again?" And then the women remembered. So Mary Magdalene, Joanna, and Mary the mother of James ran from the tomb, and shared what they had witnessed and learned and experienced with the 11 remaining disciples, And with the other women, they proceeded to carry the message to all the rest, sharing that their hope in Jesus that they thought was lost had now been found, and found anew in the resurrected Christ.

The twelfth and final and ongoing step in the 12 step program is, “Having had a spiritual awakening as the result of these Steps, we tried to carry this message to others who are addicted, and to practice these principles in all our affairs.” To have a spiritual awakening is to be found. And to be found is to be so full of life that we can’t help but share what we’ve been witness to in our own lives and in the lives of others. There is a way out. There is a power that is, through grace, always pulling us toward the light. There is repentance. There is forgiveness. There is a path to life. There is resurrection. This is the message of the twelfth step that we are asked to carry and this is also the message of the empty tomb.

The women in the story make it look easy—they are so full of joy and wonder that they run to tell the others and they continue to share what they’ve seen and what it means. But the reality is that for many progressive Christians, it isn’t easy to talk about our faith. It’s easier to talk amongst ourselves about what we believe than it is to share with others outside of the church.

On Friday, a group of us walked the stations of the cross from Epworth through the side streets up to Shattuck and Vine then back along Shattuck to Hopkins to arrive again at the church. This stations were connected to different things happening in our neighborhood, so every so often we stopped, read a meditation, then moved on. This year we decided to carry the cross which Jerry gave me for Christmas similar to the ones here on the staffs. Our group of walkers passed the cross between us as we walked the sidewalks of Berkeley, (it’s heavy,) and when it was my turn to carry it, I noticed how it made me feel conspicuous, and I wished that we had threaded a rainbow cloth through it instead of a white one, to make clear our position on welcoming LGBTQ persons. But I also hoped that in our humble, loving and invitational spirit, we might also be witnessing to a kind of faith that exists in public, that takes risks, that welcomes all since we were a diverse group in age and gender and race, and that lives in community.

Many of you have heard me talk about my experience starting the multifaith living community while I was a campus minister at UC Davis. One of the main goals of the community was to increase interreligious understanding and solidarity, and one key method for this was for students to share their faith with each other. In a community of 42 students living closely together in 6 townhouses, the students who had the hardest time sharing what they believed were the Christian students.

But soon our Christian students realized that they wanted to be able to talk about what they believed with the clarity and passion of their friends of other faiths. Having grown up in this country where Christianity is dominant, students of other religious traditions had become adept at carrying their own message, of making clear what it was that they believed. And so the students who were Methodist, Presbyterian, UCC began to break down dominant Christian phrases and rhetoric and find new language to communicate what Jesus and the church meant to them.

What was interesting was that they didn’t share their faith by quoting the great theologians of our time, or by quoting scripture. They shared their faith by remembering. They shared about times when they had been depressed or angry, and someone in their churches, maybe a youth pastor or another member, had been Christ to them and helped them become well. They shared about the peace and hope they felt when they were among the gathered who raised candles in the darkness on Christmas eve celebrating the miraculous and mysterious truth that God had come to us as one of us, and they shared memories of the feeling of seeing the sun rise on Easter morning and shouting with joy, He is Risen! at a sunrise Easter service. I hope that our youth who led in this morning’s sunrise service will always carry the feeling of this morning with them.

When the angels said to the women at the tomb, “He is not here, he is risen!” what made the women know this was true? Yes, they could see the body wasn’t there, but why did they believe that he was actually risen and not just stolen away by some grave robber? Why did they believe? The angels said to them, “Do you not remember what he told you when he was still with us, what happened on the banks of Galilee?” And then the women remembered, not just Jesus words, but what it was like to be in his presence, how it felt to be rid of the demons of shame or insecurity or addiction that possessed them, and they realized they had already been changed. They believed. They knew it was true because they felt it in their own bodies and in their hearts. It didn’t matter that it didn’t make logical sense. They had walked the path with him, and they were changed. They knew he had risen because they realized they had been risen too.

The good news of resurrection is that carrying the cross doesn’t mean suffering, it means carrying the message of Jesus. It means inviting others into the path that leads to new and transformed life. In the lived experience of being the body of Christ: reaching out, offering compassion, healing, of calling for justice, of seeking the least, the last and the lost, we demonstrate the truth of the resurrection over and over again. And on the path and in the process, we are known, loved, redeemed, FOUND. Amen. 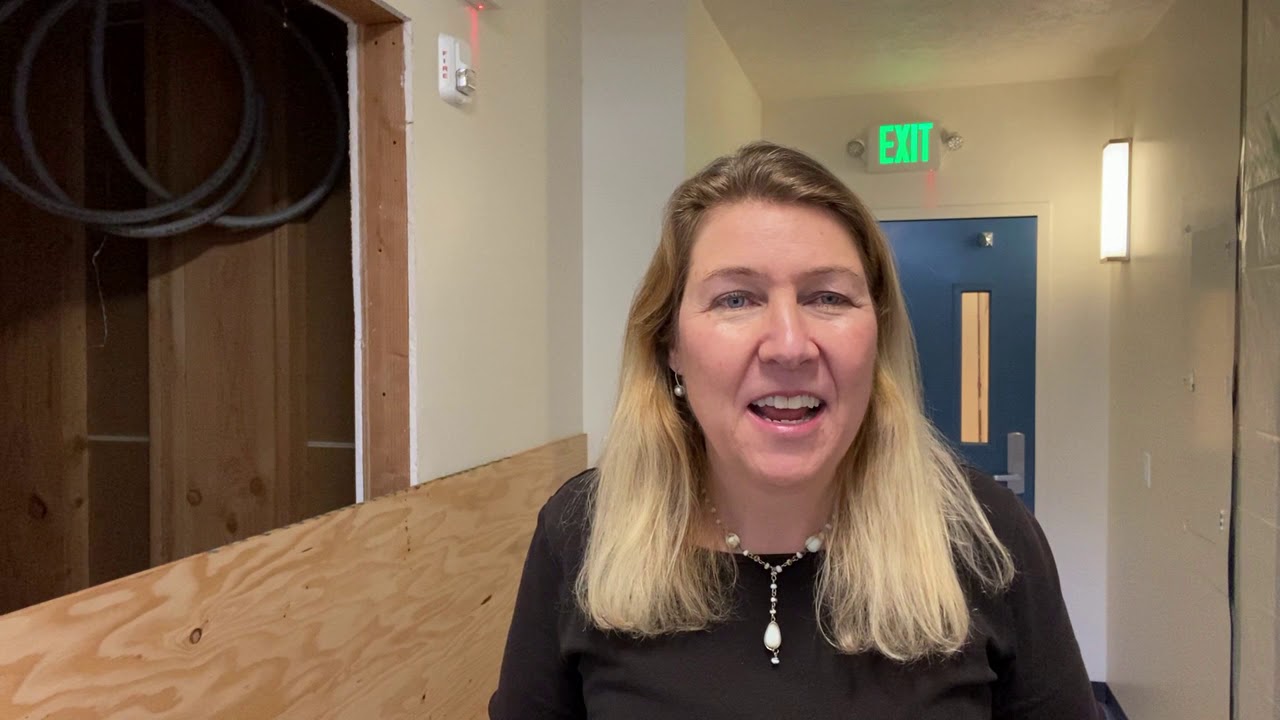